Tuesday 8th March - Year 5 and 6 shared their Fairtrade presentations with children across the school. They taught something and then played a Fairtrade related game.

Tuesday 8th March 2017:  Today, groups of Year 5 and 6 children visited the Year 1 and 2 classrooms to teach us about Fairtrade.  IN the Year 2 classroom, we learnt about Fairtrade wine from Chile, shea butter from Ghana and coffee from Ethiopia.  We played lots of games, and really enjoyed a game to find out about the long journey that many products have to make to get from the farmers to us.  We found out that Fairtrade farmers earn a fair amount of money for all of the work that they do. By Year 2 :)

Monday 6th March 2017- Y4 led a Fair Trade Assembly and we were joined by some of the Co-operative staff who revealed the poster competition winners.

The Year 4 assembly was very interesting and fascinating. They were so confident while reading their lines aloud. They talked about how Fairtrade products help people get enough money for the hard work they do. When the slideshow was on, the audience understood how Fairtrade worked; the assembly was so much easier to understand.

They did small plays and not only talked about Fairtrade but child labour, which was very intelligent of them. In the small play, they pretended to be children at a school. Two people were pretending to sell chocolate bars: they explained how Fairtrade chocolate was better than normal even though it costs a little bit more.

By Zahra and Melody

On the 6th March 2017, some people from the Co-op told us about Fairtrade and how it began. They started off telling how the Co-operative was made. Then they explained how Fairtrade started and why the Co-op has anything to do with it. One lady stated that she wanted all workers to have a fair amount of money.

By Libby and Liya 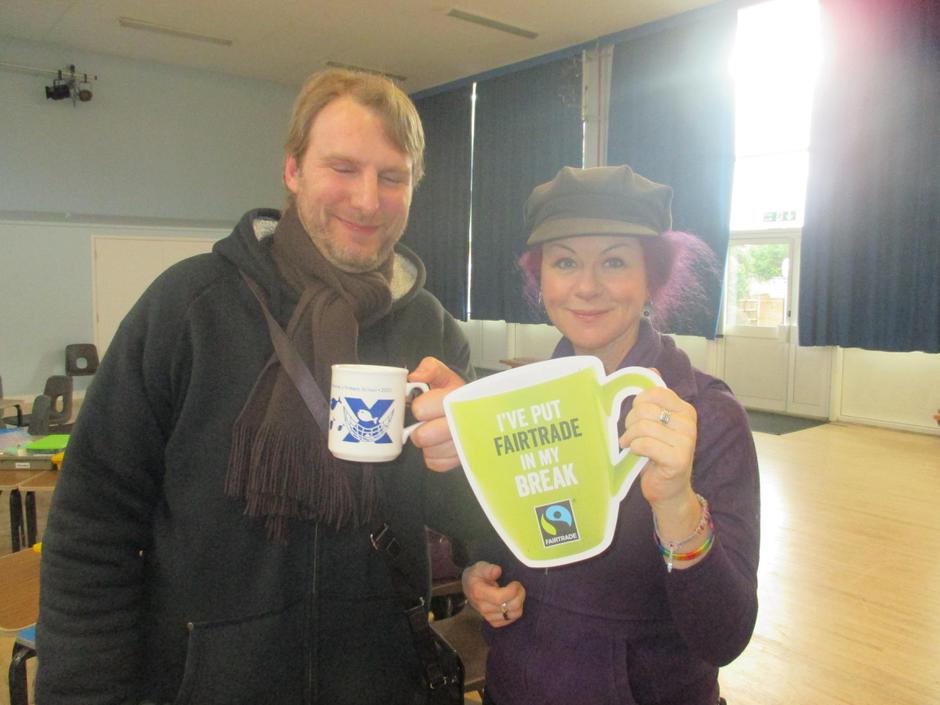 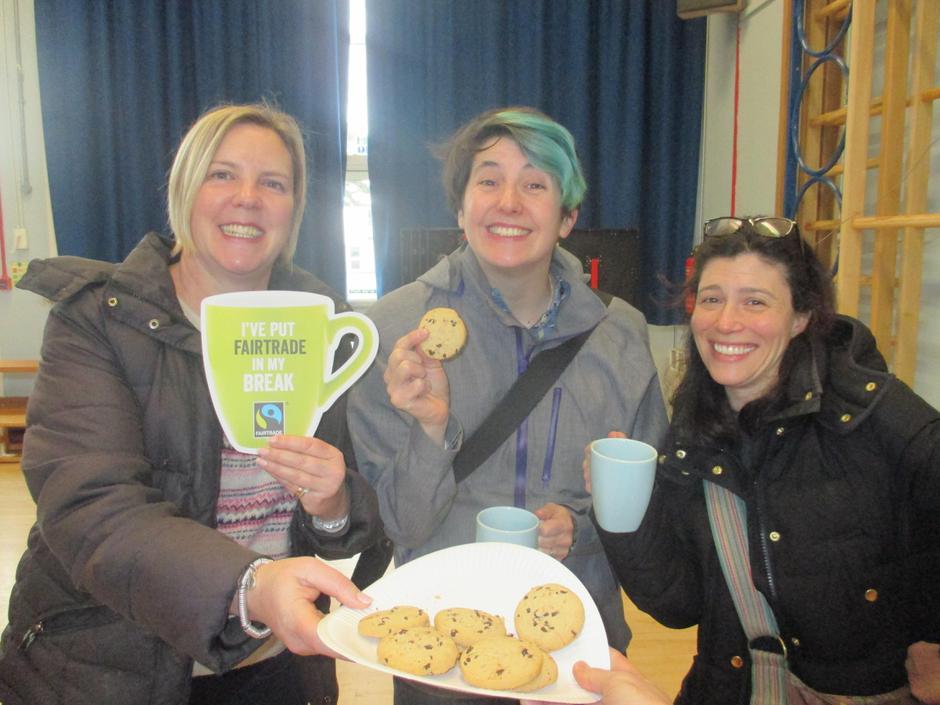 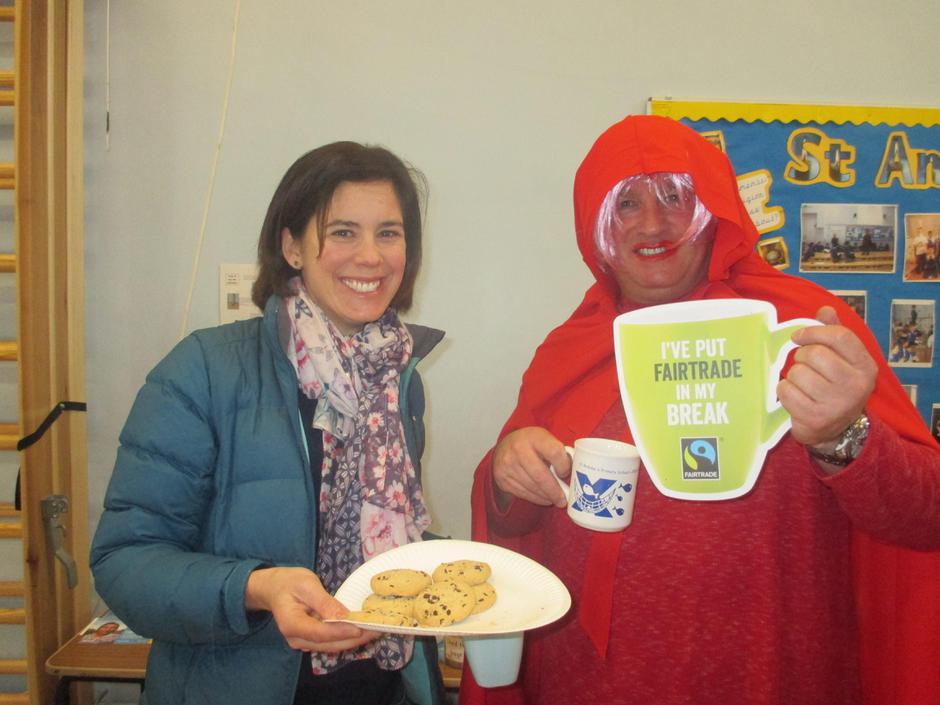 On Wednesday, our whole school participated in a competition, between the classes, to find out which had the widest variety of Fairtrade snacks. There were lots of different strategies in different classes. For example, Year 6MW decided to write a list to see who will buy what. But over in Year 6JH, they decided to do quite some baking!

Lots of children in each class brought a Fairtrade snack to contribute. Most people brought in chocolate and bananas (obviously!), but others also collected some interesting finds like iced tea, hot chocolate and jam. Sam, Year 6MW, managed to find some Fairtrade jellybeans in the Windmill Shop! There were also homemade foods with Fairtrade ingredients included in, too. One of the most popular snacks was the Co-op’s own brand chocolate chip shortbread cookies and there were also A LOT of Cadbury's chocolate.

At break time, everyone had a chance to eat their Fairtrade snacks and try a few of other peoples' too!

At the end of the Fairtrade Fortnight, Mrs Midgely will announce the winning class and they will receive a prize donated by the Co-op next door.

Some Examples of Fairtrade Snacks

The 90kg rice challenge is a fund raiser for farmers in need. The idea is to buy 90 1kg Fairtrade bags of rice for £3 each and the money is donated to a rice growing country, so a child can go to secondary school for a year!! An organisation chose Malawi to be the country we raised money for.

Josiah, Lily and Agatha interviewed Mrs Midgely about the rice sale and how it went. This is what she said...

"It was a good first day, about 30 bags out of 90 were sold for £3 each. I think it was because of the bad weather and everyone wanted to rush home." She said there was going to be another sale the next day so we could send a child to secondary school because we hadn't sold enough rice yet to do that. She wanted more people to buy bags but some people forgot their money.

She thinks that we should definitely do money raising acts for Fairtrade more often but with the children in charge.

Mrs Midgely  would like everybody to enter the rice art competition and she expects a lot of bright Rangoli patterns but she would like some Fairtrade logos as well.

Unfortunately not the ones with chocolate chips.

Some cookies are necessary in order to make this website function correctly. These are set by default and whilst you can block or delete them by changing your browser settings, some functionality such as being able to log in to the website will not work if you do this. The necessary cookies set on this website are as follows:

Cookies that are not necessary to make the website work, but which enable additional functionality, can also be set. By default these cookies are disabled, but you can choose to enable them below: